Standing up for Women's Rights in Delhi Old Delhi Streets
It has been a week since I was in the hustle and bustle of New Delhi.  My current home in Los Angeles once seemed fast paced coming from the suburbs of Jacksonville Florida, but nothing compares to the raw chaos of India's Capitol.  In my comfortable apartment, clean and safe, it is hard to imagine that I was so recently standing amongst the masses at Jantar Mantar protesting for human rights that my peers at home have enjoyed for decades.  As a woman, witnessing the suffering of other women and hearing their stories of injustice and cruelty has me on my feet, wishing I could do more.  The best I can do is reiterate that yes, we have a problem here; and it must be known. 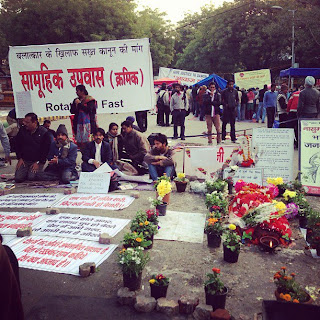 On Dec. 16th in New Delhi, a crime was committed that would capture the attention of the world; six men brutally gang raped a young woman in a public place, leaving her for dead.  Police say the victim and a male friend were attacked after boarding a bus as they tried to return home after watching a movie. The six men, the only occupants of the private bus, beat the man with a metal bar, raped the woman and used the bar to inflict massive internal injuries to her, police say. The victims were dumped naked on the roadside, and the woman died from her injuries two weeks later in a Singapore hospital.  It took murder to bring the crimes against women into the public arena.

Since the incident, human rights activists have gathered to protest the government for capitol punishment of the accused rapists, including a 17-year-old boy.  Such is the corruption of the government and the failure of law enforcement agencies to protect civilians, that some women have recently stepped forward to accuse police officers of rape and molestation.  One women I met at the protest at Jantar Mantar in Delhi was on day seven of her fast.  The crime committed by the police officer was her story.


Jantar Mantar
January 19th, at the protest, I captured the cries of one activist who put the message simply, "This is not a democracy, it is a hypocrasy!"

On site was a memorial for the rape victim from Dec. 16th as well as a fast rotation.

Women's Rights in India as it Stands 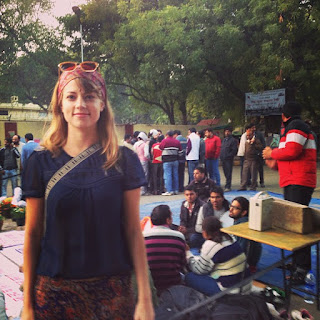 Most rapes go unreported in India.  Once a woman has been had against her will, she is considered unclean and becomes a shame to her family.  So rather than face isolation, she keeps her silence.  India has a long history of abusing civil rights.  One being the 4,000 year old dowry system that entitles the family of the groom payment from the father of the bride for adopting the bride into her new family.  Such a system is known for its back lash of bride burning, if the dowry is considered insufficient, and infanticide if the family thinks it cannot afford a girl.

While there are civil laws to protect women against bride burning and infanticide, the enforcement of the law is what is lacking.

The newest reform came months after the attack on the woman in the bus.  A government panel set up after the outcry over the gang rape and weeks of street protests by students and women examined India's criminal justice system's treatment of violence against women. After examining more than 80,000 submissions, the panel, headed by retired Chief Justice J.S. Verma, came out with a 630-page report recommending amendments to the laws governing crimes against women.


Prime Minister Manmohan Singh's Cabinet approved an ordinance to introduce stricter penalties for crimes against women, including death in extreme cases of rape. It also approved increasing the maximum seven-year sentence for rape to 20 years and imposing stiff punishments for crimes such as stalking, cyber stalking and voyeurism.
The ordinance has to be signed by President Pranab Mukherjee to become law. It would then have to be passed by Parliament within six months.

While this is considered progress by many, the reform still allows accused rapists to run for government positions.

India is still a far cry from the safety and equality of women, but one thing is certain, women's voices are finally being heard.